How to Run Memory Intensive Applications Smoothly on Your PC

Most people today, run multiple applications at the same time to speed up their work and time. But it becomes a head ache when many of such programs eat up the system memory and make the system slow. This really matters if you are running photoshop and other memory intensive applications on a PC at the same time with less amount of ram. Either the system gets extremely slow or hangs. When this happens our time and energy just gets wasted instead. Programs like Firefox, Photoshop, Adobe Premiere consumes and wastes a lot of memory / ram. If the wastage of ram by these applications can be controlled then the above mentioned system hangs and related problems can be solved to certain extend. So ,here is an application to optimize or reduce the memory usage and wastage of any application to a great extend.

Minimem is an application developed to reduce the memory foot print of any application. Minimem will run in the background with out interfering your work and Minimem can be set to optimize the memory usage of any number of applications as you wish.

What makes Mimimem special is that it will give full control over what applications you want to optimize, when and how often, as well as the possibility to only optimize memory when required. Mimimem optimizes the memory usage of applications by removing as many non-necessary memory pages as possible from the selected processes.Advantages of using Minimem to Reduce Memory Usage of Applications 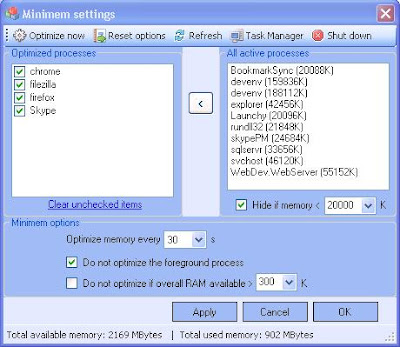 Memory Usage of Opera without Minimem

Applications that are best to be optimized for memory are typically office applications, word processors, and web browsers. Minimem was originally developed for Mozilla Firefox and hence it works the best with it.
After running Minimem it will remain in the system tray without interfering your work there by helping you access its settings at any time. Minimem has a simple user interface that is flexible for any type of user. Minimem requires .NET framework 2.0 installed. Above all Minimem is a Freeware and works with Windows 98, 2000, XP, Vista and Windows 7.

We've picked these articles just for you

By Amal on 04/09/2009
Amal Roy is the Founder-Editor of Computing Unleashed. A Technology Enthusiast, Windows Adept and a Proud Geek! | Connect with him on Google+
Subscribe to our RSS FEED
Follow @comunleashed